I was listening to National Public Radio’s evening Fake News program, called hilariously “All Things Considered,” when they aired a feature on “Presidential declarations of national emergency.”

On came an earnest NPR reporterette and it is she who unleashed the howler mentioned in the above headline. Keep in mind, the NPR conceit is that they’re so smart, so educated, so well-informed that they just toss off facts and wisdom, easily, breezily, casually. It’s a long-cultivated schtick of theirs, even though they’re… dumb as stumps.

To continue the digression a bit (really: important background), I think back to the time when LuLu Garcia-Navarro suggested to tennis Hall-of-Famer John McEnroe (here), that Serena Williams ought to be considered the greatest tennis player of all time, not the greatest female player of all time… this even though Williams herself admitted that she’d never even be able to play on the men’s tour.

Well, back to our howler.

The anchor and the earnest reporterette were discussing Presidential declarations of national emergency, and when NPR reporterettes want to show just how learned they are, they use the word: “think.” You know… “Yeah, Mary-Louise… think, Napoleon at the Alamo… or Washington at Waterloo.” It’s a way to show that the earnest little reporterette has all these examples already solidly in her brain, and at ready access for her brilliant intellect just to pluck them out and hand ’em to us, like little bits of shiny genius our much smaller minds can ooh and aah over.

The anchor set up the reporterette with something like this, “So, what about such declarations in the past?” Reporterette’s response, all breezy and loaded with self-assurance: “Sure, well there have been others in the past… think, Obama after 9/11, or George W. Bush after the economic collapse of 2008.”

There’s this very famous photo of President Obama, on 9/11. Here he is learning for the first time that something’s going on: 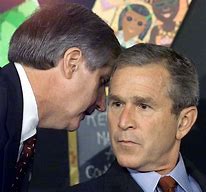 Here’s another one of President Obama at Ground Zero, with some first responders:

This picture of President Obama with a bullhorn, making a stirring little speech at Ground Zero, is very famous: 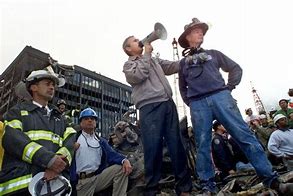 Okay, okay… we’ve had some fun. Let’s ponder this just a bit more.

One would think that the anchor, embarrassed at the rather massive slip-up by her colleague would rush to remind said colleague that George W. Bush was the President on 9/11, thereby giving that same colleague a chance to say something like, “Oh, yes, of course, my brain must have got a bit ahead of my tongue,” and they could have had a little laugh about it.

The anchor said not a word, and the conversation continued on uninterrupted, as if, indeed, Barack Hussein Obama had been President on 9/11/2001, and not some almost eight years later.

Maybe the anchor — a woman with the same easy, breezy, cool tone in all her “reporting.” — also thought it had been Obama in the White House on 9/11! Can’t rule it out.

I mean, it wasn’t even close!

No one outside of Illinois had even heard of Obama at that point!

But, the reporterette’s tone was cool, breezy, confident… knowing. Her tone just dripped the self-assured certainty that she was one of the really élite, really smart ones, one of the ones to listen to, because, well, because she just knows stuff… lots of stuff! “Think, Obama after 9/11.”

No wonder NPR bristles when they’re called “Fake News,” they really don’t know stuff! More to the point: they think they know stuff, and are completely oblivious to the fact that they don’t. Kind of like me at eight years old.

Or, as Mollie Hemingway said of reporters in general after the Covington High media scandal, and now after virtually all the media were caught with their pants down in the Jussie Smollett affair: they’re just not that bright.